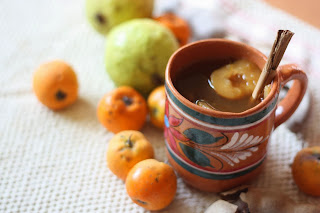 Ponche
Ponche Navideño is a hot punch made from fresh and dried fruits and a stick of cinnamon, with the option of adding booze for the grownups. The fruit can include tejocotes, guava, and tamarind. Tejocotes are fruit from a species of hawthorne tree and they resemble crabapples and smell like jasmine flowers once cooked. 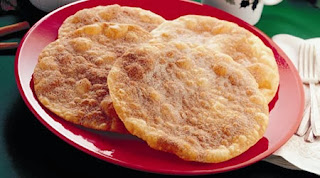 Buñuelos
Buñuelos are made from a yeasted dough with a hint of anise that is deep-fried, then drenched in a syrup of brown sugar, cinnamon, and guava. Buñuelos are commonly served in Mexico and other Latin American countries with powdered sugar, a cinnamon and sugar topping, or hot sugar cane syrup (piloncillo) and are sold in fairs, carnivals, and Christmas events such as Las Posadas. 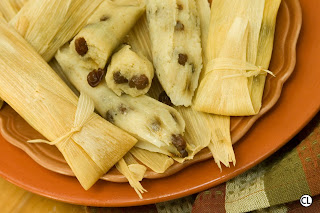 Most people are familiar with savory tamales. Tamales dulces are sweet and can be filled with raisins and other dried fruit. 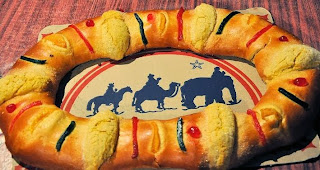 It is traditionally eaten on January 6, during the celebration of the "Día de Reyes" (literally "Kings' Day"), which commemorates the arrival of the three Magi or Wise Men. In most of Spain, Spanish America, and sometimes, Hispanic communities in the United States, this is the day when children traditionally get presents, which are attributed to the Three Wise Men (and not Santa Claus or Father Christmas). In Mexico before children go to bed, they leave their shoes outside filled with hay or dried grass for the animals the Wise Men ride, along with a note.
The tradition of placing a trinket (figurine of the Christ Child) in the cake is very old. The baby Jesus, when hidden in the bread, represents the flight of Jesus, fleeing from King Herod's evil plan to kill all babies that could be the prophesied messiah. Whoever finds the baby Jesus figurine is blessed and must take the figurine to the nearest church on February 2, Candlemas Day (Día de la Candelaria). In the Mexican culture, this person also has to throw a party and provide tamales and atole to the guests. 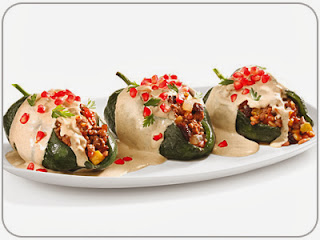 Chiles en nogada are not actually a traditional Christmas dish. They usually appear around September for the Independence celebration but continue to be served through the Christmas holidays. It consists of poblano chiles filled with picadillo (a mixture usually containing shredded meat, aromatics, fruits and spices) topped with a walnut-based cream sauce, called nogada, and pomegranate seeds, giving it the three colors of the Mexican flag: green for the chili, white for the nut sauce and red for the pomegranate. This is one delicious dish.