The Voyage of the Malagueña Part #2

We left the Gulf of Nicoya on March 16th headed south to Golfito, Costa Rica. We made an overnight stop at Isla del Caña. This island was a nature reserve. It was the first real jungle we had seen and there was also abundant sealife all around the island. 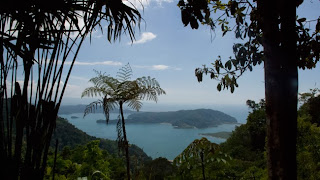 On March 21 we arrived in Golfito, Costa Rica. This was a popular anchorage with cruisers. It consisted of a bay within a bay and as a consequence was protected from the weather in all directions. The shore was covered by jungle and a strange sound we couldn't identify turned out to be howler monkeys in the trees. The most popular anchorage there was located at a place called the Jungle Club. The Jungle Club was operated by an American couple and they catered almost exclusively to cruising boats. The Club consisted of a huge thatched building carved right out of the jungle. The place had all the amenities a sailor could want. That means fuel, showers, fresh water, and a restaurant. It seemed to me to be a scene right out of Swiss Family Robinson. We went ashore every evening to eat in the restaurant and talk shop with all the other cruisers anchored in the bay. We felt we already knew many of these people because we had heard them talking on the radio every day for a couple of weeks. This I think was one of the greatest pleasures of cruising. I enjoyed meeting so many other cruisers and hearing stories of their experiences and adventures.  It was also while at the Jungle Club that we heard the strangest of stories over the HAM net.

It was reported that a boat called  California  Girl  had crashed on the rocks in northern Costa Rica. What made it particularly strange was that this happened in clear weather and they hadn't recovered the body of the man who had been sailing the boat alone. After a week or so it was reported that he had been found alive wandering in the jungle. Later the whole story came out. It seems that the skipper Bill had been on deck taking a shower with  a bucket. He leaned up against one of the lifelines which broke and he fell off his boat. The boat had an autopilot so it just continued to sail by itself. Bill grabbed a fishing line that he had been trolling behind the boat but was unable to hang on when the hook caught him in the hand and eventually the line broke. This all happened in the afternoon. Bill knew that he was about 10 miles offshore. By nightfall he had managed to swim to shore. When he arrived on shore he discovered that he was in a totally uninhabited section of the coast. It took him about a week of exploring along the coast before he finally arrived at a small biological research station where he was finally taken to the authorities. He must of been a sight walking naked and sunburn out of the jungle into someone's camp. Quite an adventure. Bill by the way was 67 years old.

Before we left Golfito, Lance one of our crew decided to jump ship and join one of the other boats. This is not uncommon and we departed Golfito with a crew of four.

On our way to the Panama Canal we stopped for a few days at  a couple of uninhabited islands where we fished, dove, and relaxed. 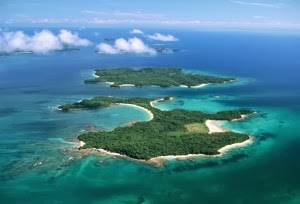 The last couple of days approaching the Panama Canal were quite hectic. Large freighters are converging on the Canal from all directions and it made for a lot of nerve racking time on watch. There is nothing quite so intimidating as seeing a huge ship looming on the horizon and headed straight in your direction. We had a near collision one night when one of our crew misjudged the distance of a nearby fishing boat. Fortunately our skipper was asleep in the pilot house. She woke him to ask about the closeness of the other  vessel. He was able to turn our ship at the last instant to avoid a collision. Apparently no one was on watch on the other ship as it made no effort to avoid us. Most cruisers we later talked with had experienced near collisions. 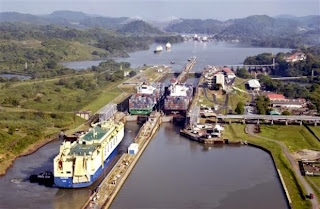 We anchored at the Rodman Naval Base in Panama as our skipper was a retired Coast Guard Officer. Our anchorage was adjacent to the entrance to the Canal and as a result we were able to watch a stream of vessels of all shapes, sizes, and types as they entered the canal. There were cruise ships, military ships, refrigerator ships, special ships hauling cars, and of course sailboats. We had privileges on the base which allowed us to eat and drink at the NCO Club and shower at the gym. It was my first hot shower in several months.

It was in Panama that two more of the crew jumped ship. This left just myself and the skipper. We placed a flyer advertising for crew at the nearby Panama yacht club. All private yachts transiting the Canal moored at the Club in preparation for passing through the Canal. General Noriega's now defunct headquarters buildings was located right next store to the Yacht Club. There was evidence of the US attack in the form of bullet holes in this and several other buildings.

The Canal is one of the world s great engineering marvels. It consists of three locks on the Pacific side which raises vessels about 75 feet. When we exited the third lock we were on Gatun Lake which is about 40 miles wide. The lake contained many beautiful jungle islands. On the other side of the lake there were three more locks that lowered us down to the level of the Caribbean side.
Our first stop on the Caribbean side of the Canal was Porto Bello. Porto Bello is one of the rainiest spots in Panama. As a result it is also the greenest and lushest port in Panama. This small natural harbor  had seen the likes of Columbus and Drake. The Spanish used Porto Bello to  store gold and silver from the west coast of South America. Mule trains carried goods across the Isthmus to Porto Bello. Today there is only a sleepy little town but lots of ruins of fortifications built by the Spaniards to protect their gold from  pirates like Drake. 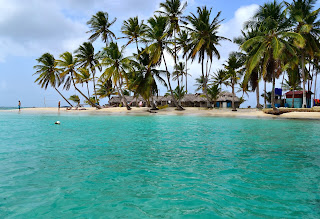 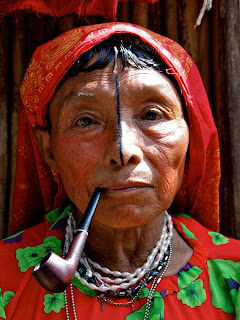 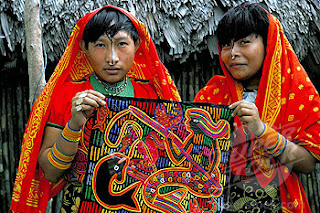 Our next stop was the San Blas Islands. The San Blas Islands consisted of hundreds of small islands covered with coconut palms. This semi-autonomous province of Panama was populated by Kuna Indians. Several tribes or family groups owned the islands and have kept them undeveloped. There was only one town of any size on one of the islands. The lack of development and the small population of the area was responsible for the water and the islands remaining so clean and undisturbed.  The Kuna Indians were very friendly and helpful. They sold  molas  which were handmade and embroidered blouses. We spent three wonderful weeks in these islands. Most of the time we were anchored amongst several islands that were on our charts but didn't even have names. All of the islands were surrounded by reefs which made the anchorages calm but didn't prevent the gentle tradewinds from keeping us cool.

We were able to dive on the reefs for plenty of lobster and crab. One night we had beach party on one of beautiful islands. It was quite a setting along a pristine white powdery beach backed by coconut palms. The meal cooked on our bonfire consisted of freshly caught crab and lobster followed by music played by crew members on the guitar, flute, and bongo drums. These islands were definitely the highlight of the trip. Many cruisers we talked to said that this was one of the nicest areas they had ever been to with their boats.

Our next stop from the San Blas Islands was Cartagena, Colombia. The trip was about three days of open ocean sailing. It was during this segment of the trip that we used a portable GPS that belonged to a crew member. The Global Positioning System consists of a couple of dozen satellites in orbit around the earth that are used for navigation. The GPS allows you to have a constant fix of your position with latitude and longitude with an accuracy of about 100 meters. We were able to program the location of Cartagena into the GPS before departing San Blas. The GPS constantly told us the direction to steer, the distance to Cartagena, and our estimated time of arrival. This device was small enough to hold in your hand. Three days later without any sight of land in between we arrived at the entrance to Cartagena harbor. 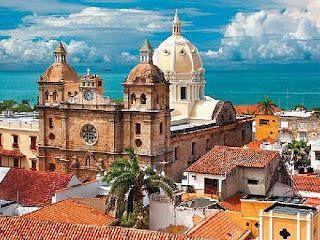 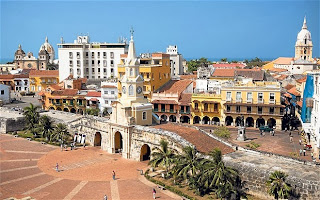 It was in Cartagena that I decided to jump ship. It was a combination of factors that influenced  my decision. First I was burned out from being on board a boat for such an extended period of time. The weather was turning hot and rainy as it was the beginning of the hurricane season. The skipper had also decided to by pass Venezuela and head straight north toward Florida. Another new crew was joining the Malagueña in Cartagena and I wasn't up to "training" them in all the intricacies of the boat. Except for the skipper, I was the last of the original crew. The skipper picked up new crew in Cartagena. It was an international group aboard Malagueña when she left Cartagena. There were three Americans, one Israeli, a Frenchman,  a German and two Norwegians.

It was without a doubt one of the most interesting trips I have ever made. I realize that boats are not for everyone but they can be a most interesting experience for the adventuresome.
Posted by RV Bond at 8:18 AM